Collegio Carlo Alberto > About us > Building

The new Collegio Carlo Alberto premises were inaugurated in October 2017. After suffering more than ten years of neglect, new life has been breathed into the building thanks to the involvement of Compagnia di San Paolo, which bought it for a total cost of 10.6 million Euro and then began a complete renovation project, carried out by a team of architects and engineers lead by Isolarchitetti Srl. The restoration of the more than 5 thousand square meters of the building in Piazza Arbarello lasted two years with a total cost of 10.5 million Euros, and took place under the watchful eye of Office of Archaeological heritage of the city of Turin.

The first record of the building in Piazza Arbarello dates back to 1866 with a listing in the Rabbini Cadastre. At that time, the building was a school overlooking the area that would later become the Piazza, while the back of the building was used as a garden. Legend has it that the school inspired Edmondo De Amicis' book "Cuore".

In 1928 the City of Turin turned the building into the "Higher Royal Institute of Economic and Commercial Sciences" of Turin and it later became the Faculty of Economics and Commerce of the University of Turin, which it remained until the 1990s.

The building took its final structural form in 1930, with a construction project under Enrico Bonicelli, a buildings engineer author responsible for the Promoter of Fine Arts Building in Turin.

Severely damaged during the Second World War bombing, the building was renovated 1950 but without following the original features.

The work took place on both the interior and exterior of the building. Outside the ancient façade, windows and the original door have been brought back to their original splendour.

Inside the building, the restoration project combined a studied historical respect with the cutting edge of green technology. The restoration, in fact, followed the Leed framework (Leadership in Energy and Environmental Design) of the Green Building Council certification body, the highest international standard for energy efficient buildings. This is the first time the framework has been used during the renovation of a historic building in Italy, turning the new Carlo Alberto into a case study.

The former hall on the ground floor has once more become an arched and glass roof structure, as in the original 1930s project, and is now the Common Room, a meeting place for the exchange of ideas and projects and one that can change according to needs. The current main lecture hall, on the other hand, is new to the building, built under ground level under the Common Room. It is a modern auditorium, with 150 seats, and can be connected by video conference equipment with both the Common Room and the classrooms. There are five classrooms, all on the ground floor, except for what is known as the wooden room (the former Aula di merceologia), on the second floor. Here the existing wooden desks, teacher’s platform and the antique blackboards have all been restored, a testimony to both the period classroom and building.

The façade on Via Assarotti at the back of the building was demolished and has been rebuilt according to the original project.

Creativity in the space: SUPERSYMMETRY

SUPERSYMMETRY is a creative project that aims to combine artistic language, a representation of fracture with the composure of the historical building, all done with great respect and in no way permanently altering this listed building. The installations in the various spaces work in continuity with each other and combine visual impact with flexible functionality. They are designed not to change the architectural surfaces, except for the ingenious 3D anamorphic images on parts of the walls, which create spectacular optical illusions that blend in with the surrounding architecture.

The atria feature three-dimensional wings made from MDF that are designed to bring the wall designs to life, creating not just background scenery but functional spaces.

There are no frames on this work, which is designed to carry the colours and shapes of the two-dimensional images into the architectural space, creating ambiguity between the designs on the surfaces and the real three-dimensional space.

If you wish to organise private or corporate events at Collegio Carlo Alberto, please contact cinzia.agliani@carloalberto.org to know available spaces and costs. 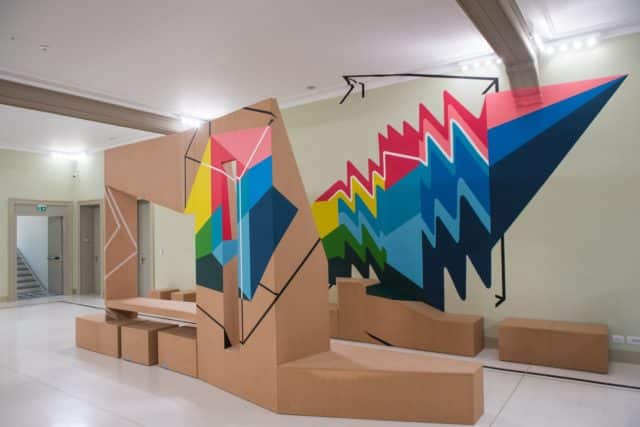 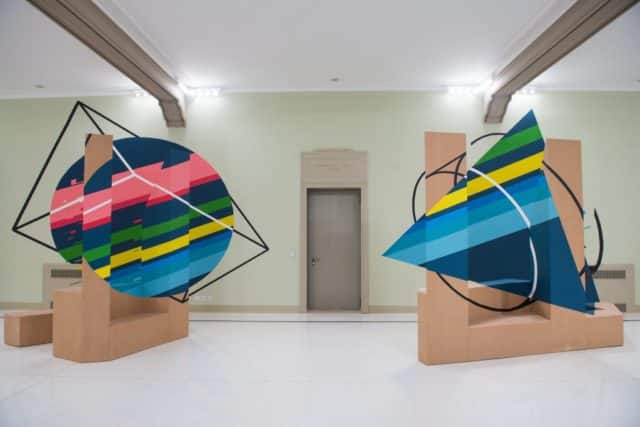 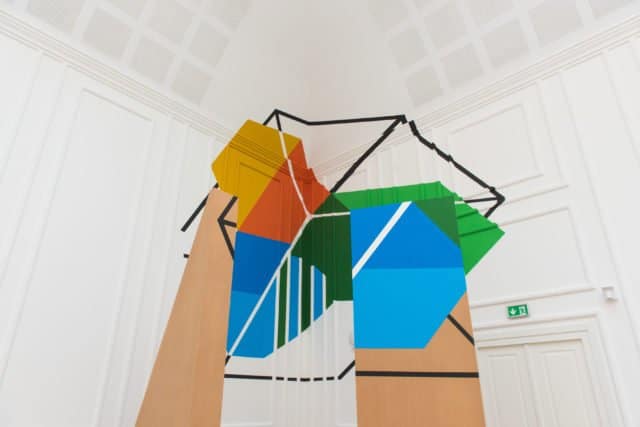 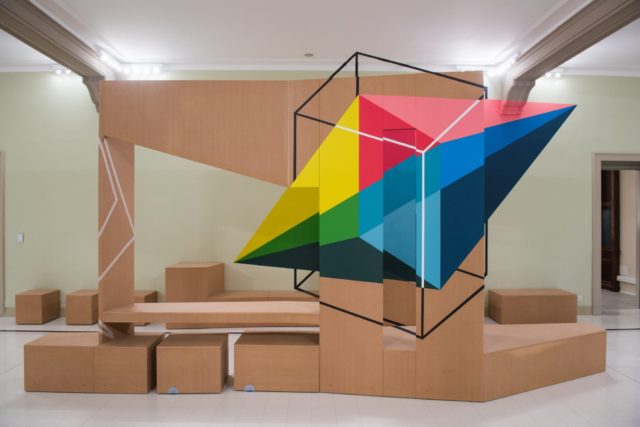